21.05.2013 Groundbreaking for the construction of a new high-bay warehouse

Due to the good performance in recent years and in the course of the further expansion of the headquarters in Sonnenberg as a global competence and sales center, PIKO has decided to further expand the logistics sector in Sonneberg-Oberlind and modernize.

For this purpose, a new high-bay warehouse for finished goods will be built. The ground breaking ceremony for this hall took place on 21st May 2013 at 10 o'clock.

PIKO owner, Dr. René F. Wilfer resulted in his speech that in recent years, in particular the field of garden railway locomotives and cars has grown strong. First introduced in 2006, we could achieve an average increase of approximately 50% in each of the last few years.Since those models are 4 times as large as H0 models, it also requires more space. However, not only 4 times as much, but 4 x 4 x 4 and is 64! That means a locomotive in G scale takes up 64 times more space than a corresponding H0 model.

Due to expanding the production of garden railway models in Sonneberg, we have consequently decided to build a corresponding high-bay warehouse here.

Therewith PIKO gets a high-bay warehouse with 4,888 pallet spaces in 6 storage levels. This need has arisen from the basic data of the 10-year plan, which was first made in 2012.

The groundbreaking ceremony was held by Dr. René F. Wilfer along with the Mayor of Sonneberg Sibylle Abel. Next were present Mr. and Mrs. Otto from Otto+Zehner Planungs GmbH who carry out the overall planning, Mr. Mey from the IWS Bau-Consult GmbH, responsible for the planning of heating and electrical installation. Furthermore, Mr. Schlicht from Schlicht Fischer Ingenieurgesellschaft mbH, who is responsible for design and analysis, and Mr. Wächter, Bauunternehmens Wächter GmbH, who carries out the earthworks and structural work.

At PIKO all the planning was done and carried out by the Technical Director, Mr. Günther Heilmann, as well as the department head for tool maintenance and operating technology, Mr. Robert Silling.

With the investment put into this building, which includes a total volume of € 2 million PIKO is getting fit for the growth in the next 10 years at the logistics side in Sonnenberg. 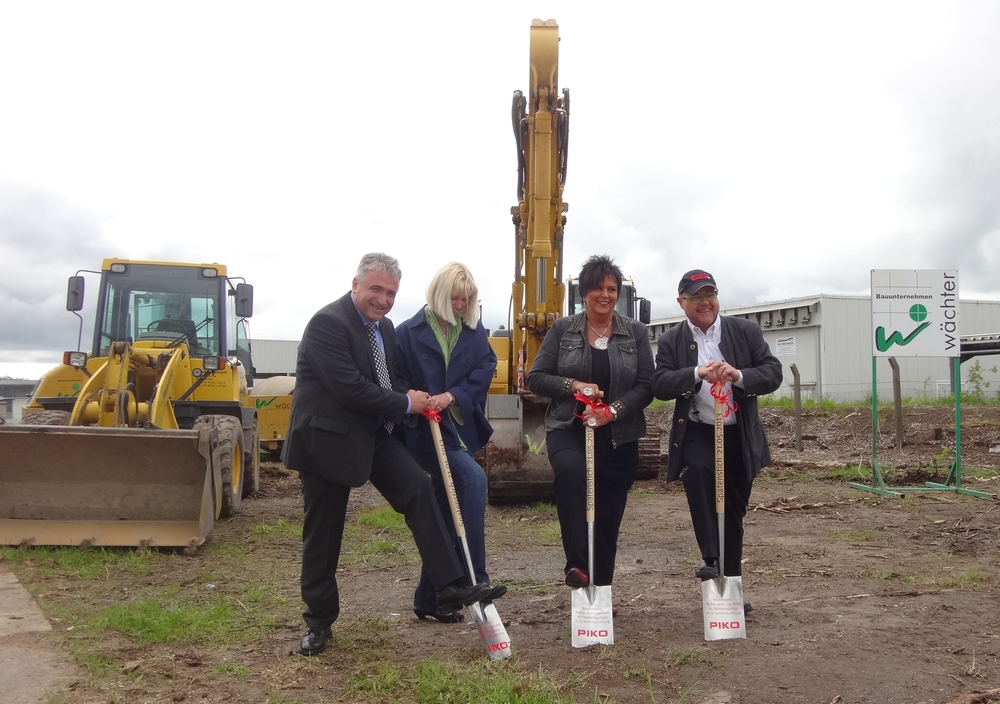 At the ceremonial groundbreaking for the new pallet racking warehouse Dr. René F. Wilfer, owner of PIKO, the Mayor of Sonneberg, Sibylle Abel, Mrs. Otto from Otto + Zehner Planungs GmbH, carring out the overall planning, as well as Mr. Wächter, Bauunternehmen Wächter GmbH, which performs the earthworks and construction met on 21st. May 2013. (from right to left)