As part of the yearly press conference in the run-up to the 70th Nuremberg Toy Fair (January 30th until February 3rd 2019) the management of the Sonneberg-based model railroad manufacturer PIKO reported about last year’s sales performance and presented a wide range of new products for 2019 to the attending media representatives.

PIKO owner, Dr René F. Wilfer, was pleased to announce to his guests, that 2018 has been a very successful year for PIKO.

Due to a combination of attractive high-quality new items, delivery reliability and a very good price-performance-ratio, PIKO again managed to exceed their planned objectives for 2018 with a sales growth of + 12% compared to the previous year.

In Germany, the largest market for PIKO with a revenue share of 66%, the positive development of the last years continued with a growth of + 9% compared to the previous year and + 6% above forecast.

PIKO increased its sales to specialised retailers in Germany, still the most important distribution channel for PIKO, by + 9.5% compared to 2017.

Especially the Swiss and US markets showed a very positive development and a growth in sales.

Besides the US and Swiss market, the foreign markets in the Netherlands, Poland and Austria also showed positive developments due to an intensive support of local dealers, active marketing and attractive new products for the specific countries. This way, PIKO managed to strengthen its position and increase sales in these countries.

In the last years PIKO managed to evolve into a reliable partner on the market for model railroads. Many retailers and customers reward PIKO’s efforts with their trust and more and more model railroad enthusiasts turn into fans of the brand. The company’s love for detail and the very good price-performance ratio of the H0-, G-, N- and TT-scale products are convincing arguments for many clients to buy model railroads made by PIKO.

Some of the cornerstones of PIKO’s development are the steady and stable supply of the model railroad market as well as the punctual delivery of its newly announced products, qualities which they demonstrated again last year.

Besides the production of all the G-scale products in Sonneberg, PIKO has its own production facilities in Chashan, where all N, TT and a large part of the H0 products are manufactured.

The range of new G-scale locomotives, the largest of the four scales offered by PIKO, shows the newly constructed steam locomotive of the Class 5035 of the German Reichsbahn, a highly anticipated model for railroad fans.

Besides the new Class BR 5035 the Class 118 of the German Reichsbahn will be part of the new G-scale product range. Both models are based on the well-known construction principles of PIKO G-scale products with a great focus on all the details of their originals. They are equipped with a strong motor, ball bearing mounted and chromed wheelsets, lighting that switches according to the driving direction and the well-known engineer.

For friends of the German Bundesbahn, PIKO releases the Passenger Cars Avmz 1st Class in red-beige colouring and Bpmz 2nd Class in blue-beige colouring, as ideal cars for the recreation of intercity trains with our highly praised PIKO Class 103 locomotive, that was released in 2018. Also new in the PIKO G-scale range is the comfortable radio remote control that can be installed in many locomotives to allow the wireless control of trains, without the need of a digital system. The range of G-scale products is extended by many new colour variations of passenger and freight cars.

The range of H0-scale products the most important of PIKO’s product segments, will be extended by many interesting new digital products, as well as new models in their Expert, Hobby and Classic nostalgie range. For the first time, PIKO will release locomotives in their Expert Plus range in the scale of 1:87. Furthermore, the popular PIKO A-track will be expanded by new track elements of the PIKO A-track with bedding. Some of the highlights are discussed in course of today’s press conference-

One of the highlights of the model train year 2019 from PIKO is the recreation of the ICE 4 in the exact scale of 1:87. The model will be released as a four-part multiple-unit as an AC and DC version as well as with sound with a factory-fitted PIKO SmartDecoder 4.1 and suitable sound module. The basic set can be extended by suitable cars, which will also be released during the year.

This year, after the success of the H0 rail bus of the Bundesbahn Class VT 98, there will be another highly detailed PIKO H0 model of a cult railcar with the model of the Reichsbahn Class VT 2.09 with many modern features.

There will be many more attractive new moulds that meet the well-known high standards of PIKO Expert models, with a true to the original design and interesting details like the Bundesbahn locomotive of the striking Class 120 (preproduction series 120 005-4) -4 and the freight train / regional train electric locomotive of the Class 181.2 with many technical highlights like the embossed name plates on the sides and the separately attached front handles.

The car assortment of the PIKO Expert line will be complemented by the control car with Wittenberg head and the City Train X-Cars, which are already released in January. The associated driving car will be released in April.

Model railway enthusiasts from Poland can look forward to an excellent model of the diesel locomotive SU46, a very important model of a Polish locomotive class, as well as to the newly constructed high-capacity freight cars 401K of the PKP. These models recreate prototypes that were and partly still are in service in our eastern neighbouring country for many years.

For the Italian market PIKO will release the newly constructed striking diesel locomotive D.145 with delicate bogies and exact recreations of the unusual chassis form.

For Switzerland, PIKO offers the new SBB passenger cars EW I. The new family of cars is recreated based on the most built Swiss passenger cars of all time. The passenger and restaurant cars are the ideal addition to last year’s railcar RBe 4/4 and the matching control car EW II.

The top range of PIKO’s H0 models are the locomotives of the Expert Plus line. The detailed models come factory-fitted with a modern PIKO SmartDecoder 4.1 Sound and the newly constructed PIKO digital coupler for effortless coupling and decoupling of cars. Furthermore, the models are equipped with an integrated buffer storage that allows smooth switching without any unwanted current interruptions. The first locomotives from the Expert Plus series will be released in the 2nd quarter of 2019 with the blue-beige era IV diesel loco of the Class 260 and in the 3rd quarter of 2019 the era IV model of the Dutch diesel locomotive Rh 2205 NS, bot as AC and DC models.

2019 will also bring out new digital products developed by PIKO.

After last year’s release of the innovative PIKO SmartDecoder 4.1 with and without sound, PIKO releases the matching PIKO SmartProgrammer and PIKO SmartTester in 2019. The PIKO SmartProgrammer enables the easy and comfortable download of sounds that have specifically been recorded and mixed by our sound engineers, the upload of individual station announcements on your PIKO SmartDecoder 4.1 Sound – blank decoders will be available for the first time in 2019 – as well as individual settings of the respective decoders. The matching PIKO SmartTester offers interfaces for most modern decoders of the scales N, TT and H0 as well as for decoders of larger scales. Through LED lights, a motor simulator and the integrated loudspeaker or the matching app, it ensures a direct feedback during the testing and customizing of decoders.

The PIKO SmartProgrammer can be used by itself or together with the PIKO SmartTester. This way, you can download, customize and test PIKO sounds that stand out by their lovely designed details and realism. The two digital components are expected to be released in the 2nd quarter of 2019.

As part of a product update, the highly acclaimed PIKO Classic nostalgie model of the “Blue Lightning”, the ÖBB Class 5045 diesel train, will be upgraded with a PluX22 interface and realistic sound. he PIKO H0 Classic nostalgie range, the range for collectors and fans of historic model railroads, and the affordable H0 Hobby range both will get new colour and lettering versions of popular wagons in the well-known PIKO quality.

Our range of TT products will feature the 1:120 scale model of the diesel locomotive TGK2 „Kaluga“, a real highlight that has already been released as a H0 model last year. The small switching locomotive is characterized by its detailed appearance as well as pre-installed driver’s cabin lighting and will also be available with sound.

The assortment of PIKO N-scale models will be extended by a cult locomotive for passenger and freight trains, the V 200.1. The loco is characterized by a felicitous realisation of the bulky front, sharp engravings, delicate replications of grilles and the exhaust pipes on the roof and detailed bogies. The V 200.1 also features many technical highlights like a modern Next18 interface and LED lighting. Furthermore, PIKO releases a new version of the Class 82 steam locomotive as an era III model with water preheater.

Due to PIKO’s strong placement at retailers and the attractive novelties for the different markets and scales, PIKO plans an increase in sales of around + 5 % for 2019.

We anticipate that domestic sales will increase slightly more than export sales, where we expect a consolidation, due to the interesting and extensive range of new products.

In the course of the press conference, CEO Dr René F. Wilfer also invited everyone to the 11th “Open House Day” on June 22nd 2019 at the PIKO plant in Sonneberg. The theme of the event will be the 70th anniversary of PIKO and it will surely be a highlight in the calendar of every model railway fan. On this special day, PIKO will offer numerous attractions like a large tombola, the sale of second quality goods and many interesting charter trains for the guests.

You can find an overview about the complete PIKO model train assortment 2019, in the scales H0, G, N and TT, and all new products as well as further information about our “Open House Day” 2019 online under www.piko.de or in our new 2019 catalogues which are available in specialized shops since the beginning of the year. 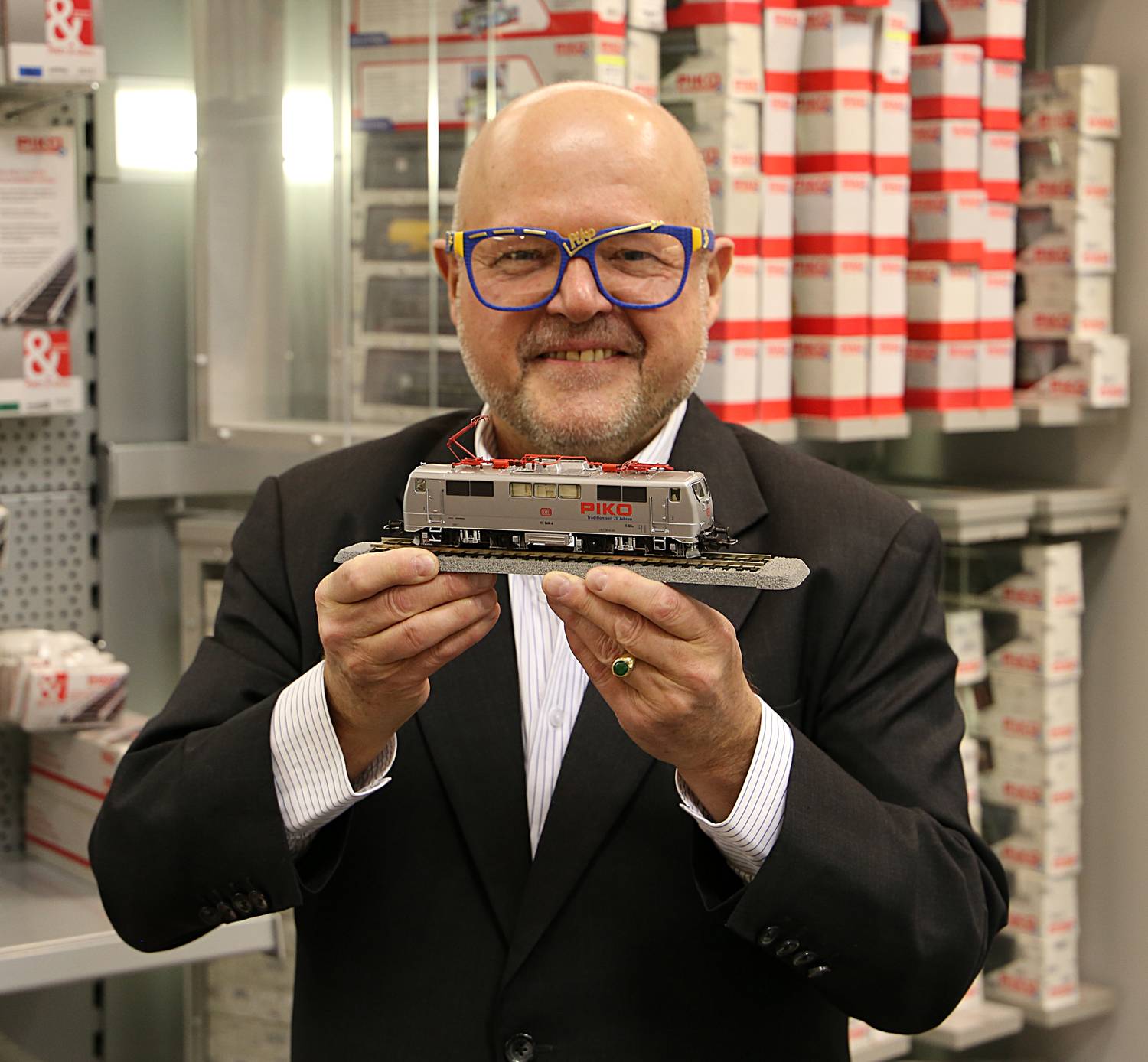 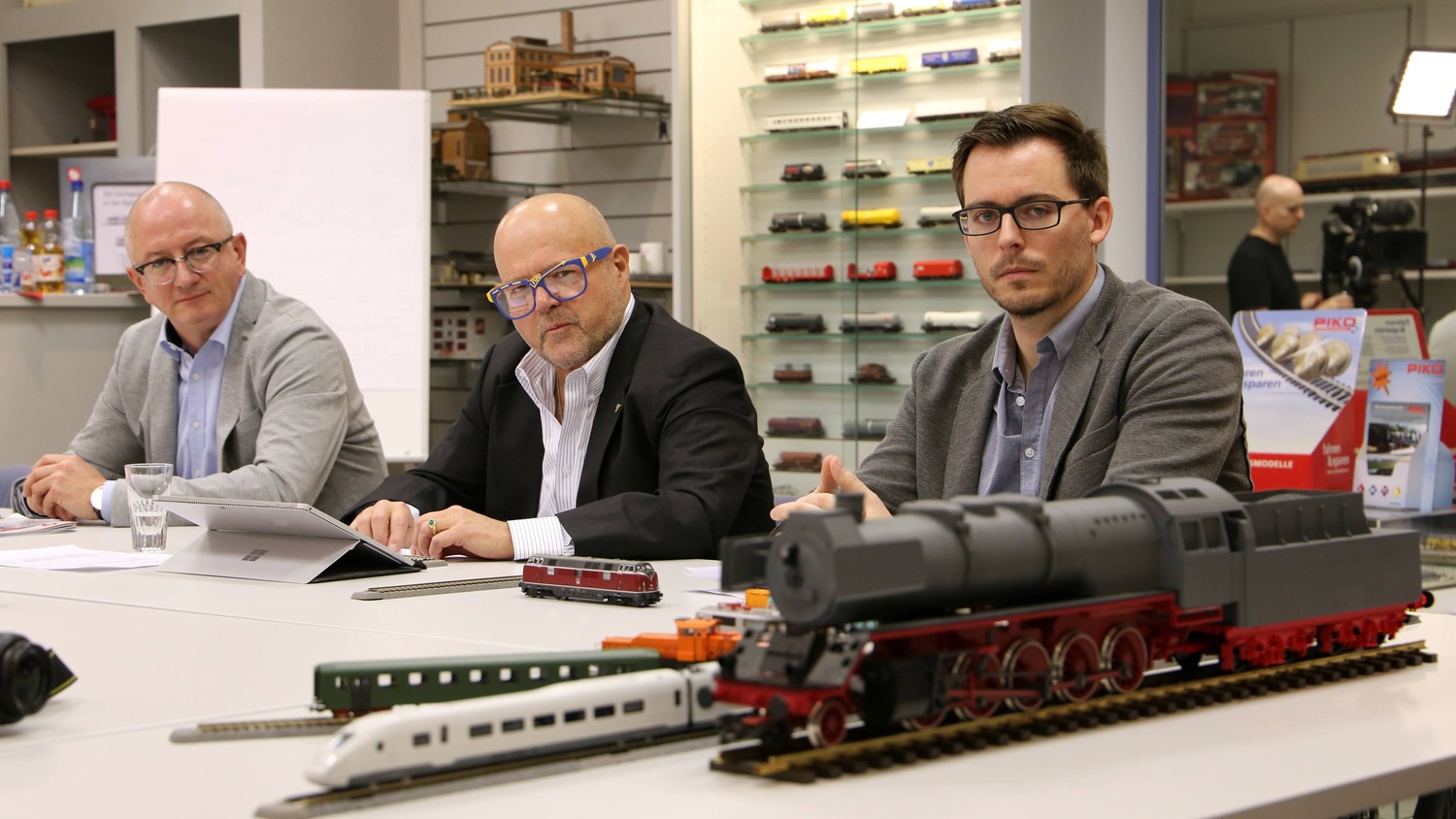