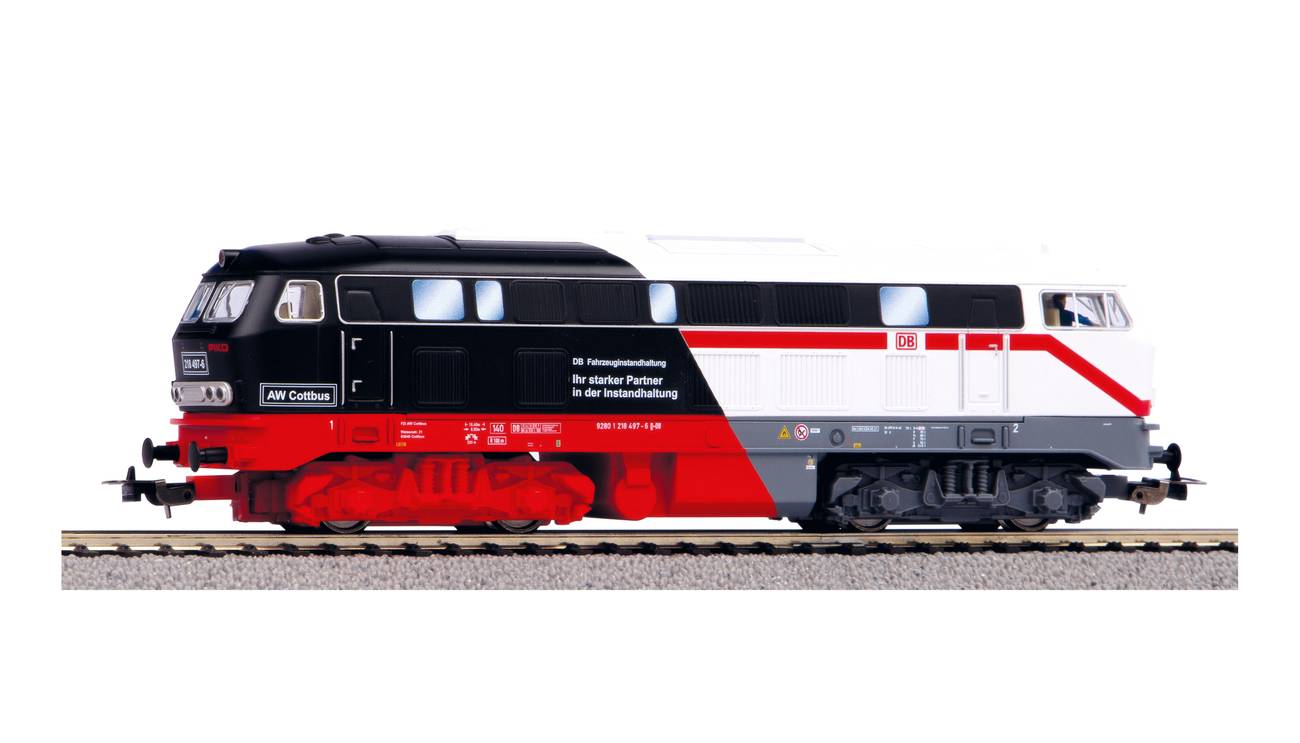 There is coming up something very special to all model railway enthusiasts.

For the first time in history, there will be a prototype locomotive and corresponding models featuring the logos of the two well-known model railroad manufacturers Märklin and PIKO.

For this special reason, the managing director of Märklin, Mr. Wolfrad Bächle, and the PIKO owner, Dr. René F. Wilfer, met in Cottbus. On the area of the DB Fahrzeuginstandhaltung GmbH (FZI) the presentation of a special vehicle in prototype and models took place in the context of a, for operational reasons, non-public event.

This newly presented locomotive is the diesel locomotive with the number 218 497-6.

For several decades, the class 218 characterized the rail image of the German Federal Railroad. Even after the rail reform of 1994, it was frequently seen on the DB AG Group's route network. Over the years, many machines have disappeared from active service.

The chosen prototype symbolizes the history of its new home at the Fahrzeuginstandhaltungs-Werk (FZI) in Cottbus, from steam locomotive refurbishment to ICE maintenance in the future.

The special feature of locomotive 218 497-6 is its eye-catching special paint scheme, which was the result of a creativity contest among FZI employees: Steam locomotive time - black, modern ICE time light gray with red band.

The model train manufacturer Märklin from Göppingen offers the vehicle in H0 AC in metal construction with multiprotocol digital decoder mfx+ and 15 sound functions based on original recordings at a price of € 299.00 (MSRP). Also the concise rail scraper was realized especially for the implementation of the prototype. Delivery will start at the end of August.

For the first time in the PIKO H0 lineup, a sound version of the class 218 will be released, with the sound completely newly recorded in Cottbus on the original engine, and will be available starting in October. This model is the proud bearer of the new PIKO TrainSound® seal of quality - Superior Sound with Load Control. The decoder used in the digital sound model is the PIKO SmartDecoder XP 5.1, the latest decoder generation from PIKO. The MSRP for this model is € 199.00.

Garden railroaders can also look forward to a PIKO model of the 218 497-6, which will be available from the end of September at an MSRP of € 450,00

As advertising partners, both model train manufacturers supported the project intensively from the very beginning. To achieve the best possible results, both manufacturers combined their expertise in model realization.

For the first time, the prototype and the H0 models from Märklin and PIKO were presented simultaneously. The various model versions will be introduced as new products in the manufacturers' assortments.

In their welcoming speeches, both managing directors were able to report on successful cooperation with Deutsche Bahn AG on this project. Their special thanks went in particular to FZI plant manager Uwe Domke, who promoted the project with a lot of model railroading enthusiasm from the conception to the implementation from the very beginning.

In this respect, many models of this attractive locomotive with its symbolic special paint scheme will certainly find a new home on the layouts and in collections of model railroaders in the various scales.

the PIKO video from the Roll Out: