A Bavarian H0 scale evergreen! The electric locomotive E 32 as an Expert model by PIKO 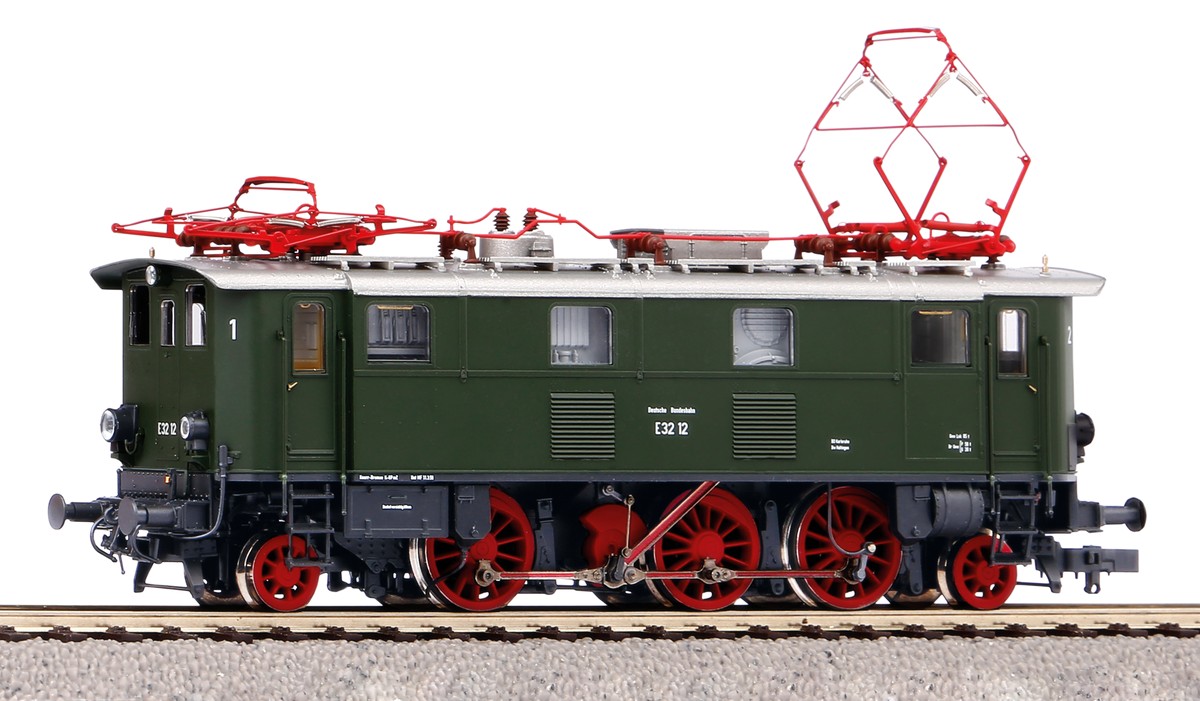 
The highlights of the model in key points:


» The model in the PIKO Webshop

Further information about the prototype and model:

Between 1924 and 1926, the Bavarian Group Administration of the Deutsche Reichsbahn commissioned the BBC and Maffei companies to supply a total of 29 electric locomotives for light passenger train service. The locomotives were designated EP 2 and given the numbers 20006 to 20034. The operational areas of the striking machines were initially Upper Bavaria and Swabia. In 1927, the locomotives were renamed E 32 006 - 034. A characteristic feature of the E 32 was the diagonal rod drive in combination with spoked wheels. The maximum speed was 90 km/h. After World War II, the German Federal Railroad took over 24 still intact machines and operated them as the E 32, and from 1968 as the class 132. As a replacement for the E 71 electric locomotive and the ET 25 railcar, the class 132 was given a new area of operation in Baden. The last remaining eight loco-motives were retired on August 1, 1972.

The now extensive family of old-style electric locomotives from PIKO is getting another addition. The latest classic of electric traction from PIKO impresses with its outstanding design. The metal inclined rod drive is faithfully reproduced. Spoked wheels further enhance the visual appearance and bring back memories of by-gone days on the rails. Painting and printing are on a high PIKO level down to the smallest detail. The locomotive is completed by a flawless roof. The finest rivets contribute to this just as much as prototypical roof lines, completed by filigree metal pantographs.

With a lot of handwork and enthusiasm, the numerous details and attachments on the model have been implemented. These include the free-standing handrails, the lamps, brake pipes and also sandboxes. The buffer plank can be equipped with enclosed accessory parts.

Thanks to the existing PluX22 interface, digitalization of the analog DC version is easily possible at any time. Two traction tires support the powerful motor with flywheel masses during the drive.

A debut is the PIKO SmartDecoder XP 5.1 used for the first time in the sound and AC versions. The sound fulfills the new quality seal PIKO TrainSound® onboard. Up to 8 sound channels can be played simultaneously, with a maximum of 8 minutes of sound memory. A sound fader allows volume reductions. This makes it possi-ble to simulate tunnel runs, for example. Furthermore, locomotive and sound control are coordinated with each other.

A milestone is the filigree adjustable load dependence of the sound control. The decoder automatically detects whether the locomotive is running uphill, on level ground, or downhill. The sound automatically adjusts to this in sync with the wheels. Without a factory-installed sensor, this is done by the most precise adjustment of the PIKO sound specialists. The sound of the driving rods has been adapted exactly to the driving behavior of the locomotive. Model and sound merge into a complete work of art. Sound functions can be linked to other sound functions and trigger each other. For even more realism, this can also be done randomly.

The volume of the sound can be adjusted in five volume levels by a function key. In curves and during braking, squealing sounds can be adjusted depending on the speed. With the PIKO SmartProgrammer, this can be done easily without complicated programming of CV values.

The new decoder generation remains future-oriented right from the start. The fulfillment of the latest standards was considered during development. Thus, the PIKO SmartDecoder XP 5.1 comes up trumps with broad connectivity. The registration at the digital command station is done automatically by RailComPlus®. For AC operation, the PIKO SmartDecoder XP 5.1 features mfx capability, which ensures the highest functionality.

A classic meets a technical quantum leap! The combination of experienced model railroad manufacturing and state-of-the-art electronics opens up entirely new possibilities. The new PIKO SmartDecoder XP 5.1 makes PIKO models much more realistic in a single stroke. The PIKO model offers the possibility to relive the fascination of early electric traction. Set in Era 3, it offers numerous interesting train combinations. PIKO owner Dr. René F. Wilfer has documented the production of the E 32 by PIKO himself. The V-Log published on the PIKO YouTube channel gives interesting and exciting insights into the production.