At the annual press conference, the management of the Sonneberg model railway manufacturer PIKO reported on the sales development of the past year and presented the attractive new products programme as well as the planning for 2023 to the media representatives present.

PIKO owner, Dr René F. Wilfer, together with the overall sales manager, Jens Beyer, reported to the guests present on a challenging but nevertheless successful year 2022.

After the strong growth in turnover in the past two years, the development of turnover in 2022 was somewhat weaker. The reasons for this are manifold. On the one hand, as in 2021, there were significantly longer container transit times from China to Sonneberg. While the containers used to be en route for between 35 and 40 days, they now take up to 126 days. This resulted in significant delays in deliveries to the trade until the middle of the year - models that left the factory in China by ship in April arrived in Sonneberg in August. On the other hand, the continuing difficulties in procuring electronic components for decoder production continue to affect the delivery of digital and sound models. These two factors in combination resulted in a decline in sales of -7% as of August compared to the same period last year.

In the second half of the year, container transit times returned to normal and logistics conditions improved steadily. As a result, a large number of PIKO novelties could be delivered to the specialised trade from mid-September onwards, generating strong sales both domestically and in the export sector.

Furthermore, another event had an impact on the model railway market in 2022: Russia's war against Ukraine has kept the whole world on tenterhooks since February 2022 and has also left its mark on the German economy. The resulting rise in energy costs, combined with the increased container costs, forced PIKO to increase prices unscheduled in the middle of the year. In addition, the increasing general uncertainty is also having an impact on buying behaviour in the model railway market. People's fear with regard to the future is reflected in a reluctance to purchase non-essential items, which include model railways. However, Dr. Wilfer assumes that this attitude will improve in the coming months, since on the one hand energy costs will return to normal and people will not let themselves be endlessly deprived of the joy of their hobby.

Despite these difficult general conditions, the Sonneberg model railway manufacturer also managed to achieve a slight increase in turnover in 2022 compared to the previous year. However, with a plus of + 2.7%, this growth was below the overall growth of + 8% targeted at the beginning of the previous year.

Nevertheless, PIKO believes that it has come significantly closer to its goal of becoming the second largest model railway manufacturer on the continental European market and the number 1 among DC suppliers in 2022.

PIKO Sales Manager Jens Beyer was pleased to report that the company had achieved a slight increase in sales in both the domestic and export markets compared to the previous year and was thus able to grow in almost all markets.

Thanks to a strong December, the German specialised trade, which is PIKO's largest and most important sales channel with a share of more than 50% of the total turnover, was even able to close the year with a plus of 5% compared to the previous year and thus at the planned level.

In the foreign business, sales developed very well in the past year, especially in Switzerland. ARWICO - as the PIKO importer of this country, which traditionally has a great affinity for model railways - succeeded in making Switzerland the PIKO export market with the highest sales in 2022 and at the same time securing the title of "PIKO Export Nation of the Year".

In addition, things also went well in the Czech Republic as well as in the directly supported sales regions such as Poland, the Netherlands, Austria, Belgium and Denmark, and PIKO was thus able to further expand its market position in the respective countries.

A significant contribution to the positive development was again made by extremely attractive and high-quality new products in the 4 gauges H0, garden railway, TT and N as well as the very good price-performance ratio and the excellent quality of the PIKO models.

In recent years, PIKO has become a reliable partner on the model railway market worldwide, both for the specialised trade and for consumers. A central element of this partnership is the good and stable supply of goods to the trade as well as the on-time delivery of the announced novelties. Although this could not always be ensured in 2022 due to the factors described above, PIKO is confident that the models will appear in the trade on time again in 2023.

In G gauge (scale 1:22.5), the gauge for garden railway enthusiasts and the largest gauge at PIKO, the extremely attractive NoHAB diesel locomotive, also affectionately known as the "round nose", will appear this year in the STRABAG version in the Santa Fe design. The model appears both as a version with and without sound.

With the new design of the Railjet control car with business compartment, PIKO adds an essential element to the Railjet range. Together with the matching PIKO locomotive already in the PIKO assortment, the 1st and 2nd class passenger car and the buffet car, which will also be added in 2023, prototypical trains can be formed.

In the H0 segment (scale 1:87), the best-selling and most extensive segment within the PIKO portfolio, a large number of interesting new products will again appear in the Expert, Expert Plus, Classicnostalgie and Hobby product lines. Some highlights for the domestic and foreign market were discussed in more detail during the press conference.

A highlight in the PIKO H0 segment is the BR 03 steam locomotive. The locomotive will be released in the course of the year in three different versions as BR 003 of the DB, BR 03 of the DR and Pm2 of the PKP. All models of the series convince through the consideration of the country-typical characteristics down to the smallest detail.

Among the electric locomotives, friends of historic old-building locomotives can look forward to the BR 117 / E 17, built from 1928 onwards. Right at the beginning of the year, the modernised 117 110-7 of the DB will appear as a special example of this original locomotive.

In the international area, PIKO presents the express locomotive Rh 1018 of the ÖBB as well as the further development of the "Laminátka", the Czech class S499.02 of the ČSD. Both models demonstrate the highest level of model making and great attention to detail.

With the class V 100, a simple branch line locomotive rolls into the PIKO H0 assortment. The diesel locomotive with central driver's cab appears as the BR 211 of the German Federal Railways. With the new designs of the SM31 of the PKP and the KM 4000, the diesel traction also receives international growth. The latter appears in the Southern Pacific Railway version and is available with prototypical paint and printing of the first three locomotives delivered by Krauss-Maffei to SP.

Starting this year, the so-called modernised IC cars of Deutsche Bahn can also be found at PIKO. While DB AG relied on already existing coaches, PIKO relies on a completely new design. A matching driving trailer complements the 1st and 2nd class coaches as well as the dining car.

Model railway enthusiasts from Belgium and the Netherlands can look forward to the shape variants of the ICR passenger coaches. Here, PIKO presents, among others, the Fyra passenger cars with matching class 186 locomotive. As a special highlight, newly designed control cars will also appear to complete the train sets.

The new versions of the NoHAB diesel locomotives, which were presented last year as a new design and are now being delivered in January, are representative of the many interesting colour and shape variants.

The vehicles of the Expert Plus line represent the top of the PIKO H0 models. Matching the Expert models of the class 03, the class 003 of the German Federal Railways is also released as an Expert Plus model. This model also features a wheel-synchronised, pulsed evaporator, which, in combination with the model's diverse light and sound functions, guarantees maximum model railway fun on the layout.

The Classicnostalgie programme will be extended by, among others, a class 211 in blue-yellow livery of the S-Bahn Leipzig in era IV. A through coach and a driving trailer in contemporary livery and printing will also be released to match. In addition, many other colour variants of well-known car types will appear.

In the low-priced H0 Hobby assortment, several colour and lettering variants of well-known series and wagons are convincing, including double-decker wagons with a matching control trailer of the DSB.

After many TT railroaders probably looked longingly in the direction of the H0 range last year, this year the main novelty in the PIKO TT range (scale 1:120) is the steam locomotive of the class 93. First, the model will be realised in a version of the era III of the Deutsche Reichsbahn, both as a variant without and with prototypical sound. The numerous other novelties in the TT range include a variant of the E 50 of the DB in Era III as well as two form variants of the BR S499.1 that appeared last year, one as a version of the ČD Cargo and the other of the ZSSK in Era VI. As a special highlight, all newly delivered PIKO TT models now have a TT close coupling ex works, which allows prototypical model distances.

In the PIKO N range (scale 1:160), the new models of the electric locomotive TRAXX are released, on the one hand in the version of the DB AG with two single-arm pantographs and on the other hand in the version of the SBB with four pantographs. As usual, great importance was attached to the design, the detailing and the faithfulness of the models to the prototype. The class E 16 is joined by a DB variant in Era III and for friends of more modern locomotives PIKO presents a class 101 of the DB AG in Era V, which takes into account all the shape and lettering characteristics of the prototype.

Another new model in the smallest PIKO gauge will be the IC car in the PIKO range next year. These cars, which became famous at the DB with the slogan "Every hour, every class", will appear in first and second class as well as dining cars.

Digital drivers and digital beginners can look forward to a completely newly developed version of the PIKO SmartControlwlan. The hand controller of the new control unit has a clear colour display and is wirelessly connected to the control unit via WLAN. This means that nothing stands in the way of free movement around the layout.

Due to PIKO's good positioning in the trade, the extensive and attractive new products for the various markets and track sizes, and taking into account the difficult general conditions that will continue in 2023, a moderate increase in sales of + 3% is expected for 2023 compared to 2022.

With a planned growth of + 8%, the export sector is expected to develop somewhat stronger than the domestic turnover.

An overview of the complete PIKO model railway assortment 2023 can be found on the internet at www.piko.de as well as in the current catalogues for 2023. As usual, the TT and N catalogue has been available since the beginning of the year in specialist shops as well as directly from PIKO. This year, for the first time, the H0 catalogue and the G catalogue are only published in digital form and can be downloaded free of charge from the PIKO online shop. Instead, there is an extended new products brochure in printed form for each of the two gauges, in which all new products for 2023 are presented together. These are available free of charge from specialist dealers and PIKO. 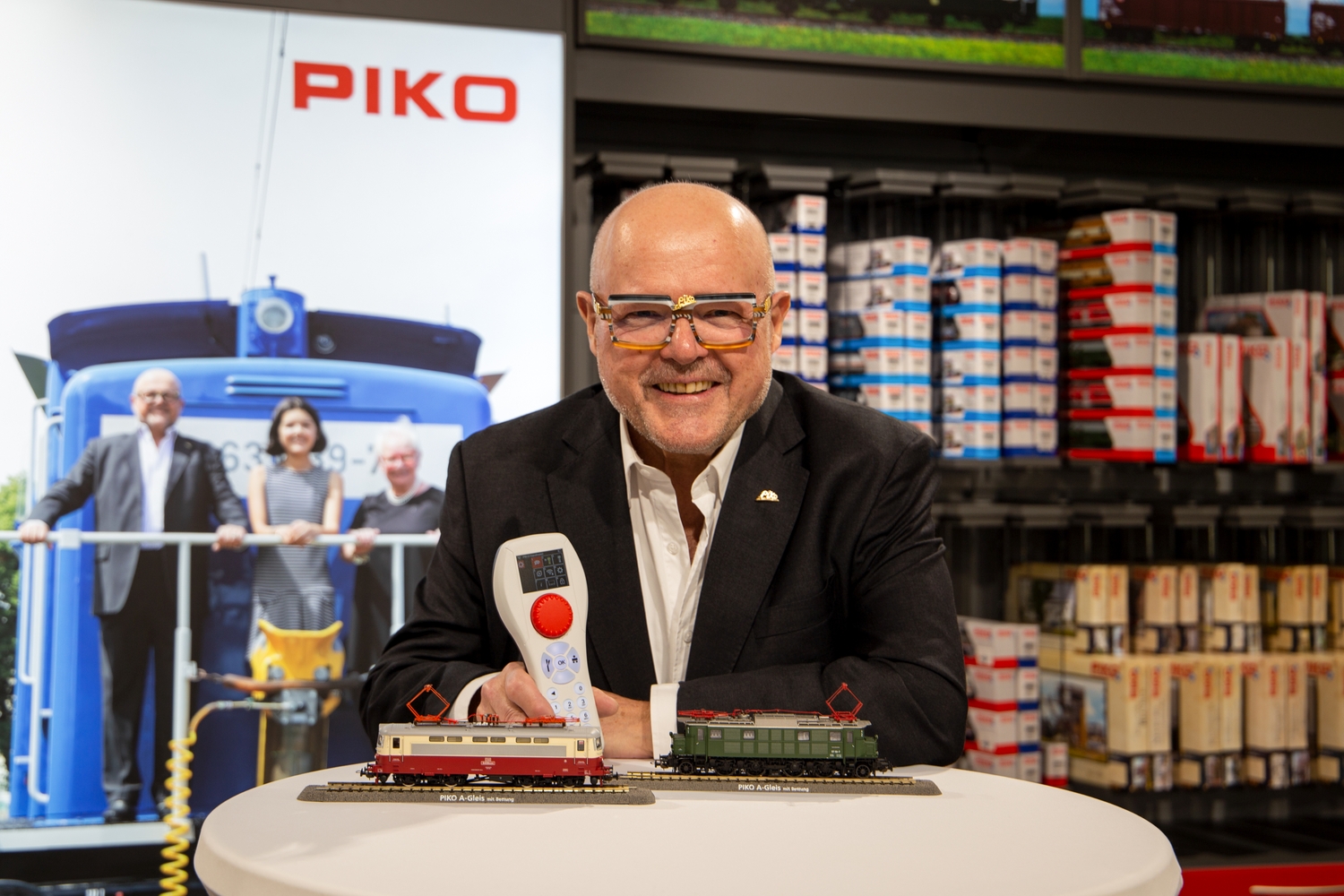 More impressions can be found here: