As part of the yearly press conference in the run-up to the Nuremberg Toy Fair (31st of January to 4th of February 2018) the management of the Sonneberg-based model railroad manufacturer PIKO reported about last years sales performance and presented a wide range of new products for 2018 to the attending media representatives.

PIKO owner, Dr. René F. Wilfer, was pleased to announce to his guests, that 2017 has been a very successful year for PIKO.

With a strong sales performance during last year’s Christmas season PIKO managed to slightly exceed their planned objectives for 2017 with a sales growth of 6% compared to the previous year. This way PIKO continued the positive development of the last years. Considering these positive developments and the fact that the market for model railroads remains static, PIKO managed to strengthen its position as the third largest manufacturer of model railroads in continental Europe.

In Germany, the largest market for PIKO with a revenue share of 69%, the positive development of the last years continued with a growth of 7% compared to the previous year.

PIKO increased its sales to specialised retailers in Germany, the most important distribution channel for PIKO, by 4% compared to 2016. At the same time, the German B2C business as well as sales to stationary and mail-order key accounts developed better than expected.

PIKO’s export business also showed an increase of sales by 3% in 2017.

Especially the Polish, the Dutch and the Austrian market, which are directly supplied by PIKO, showed a very positive development and a growth in sales. PIKO managed to strengthen its position on these markets through intensive support as well as through attractive marketing and innovative new products

The company’s own sales organisations in the US and in China had a positive and strong year 2017 as well.

In the last years PIKO managed to evolve into a reliable partner on the market for model railroads. Many retailers and customers reward PIKO’s efforts with their trust and more and more model railroad enthusiasts turn into fans of the brand. The company’s love for detail and the very good price-performance ratio of the H0-, G-, N- and TT-scale products are convincing arguments for many clients to buy model railroads made by PIKO.

Some of the cornerstones of PIKO’s development are the steady and stable supply of the model railroad market as well as the punctual delivery of its newly announced products, qualities which they demonstrated again last year.

Besides the production of all the G-scale products in Sonneberg, PIKO has its own production facilities in Chashan, where all N, TT and a large part of the H0 products are manufactured.

The positive developments on the German market and in the export countries resulted in a profit for the company in 2017. On this account PIKO is well-positioned to face the challenges on the market for model railroad products in the upcoming years.

PIKO owner, Dr. René F. Wilfer and sales director Jens Beyer used the press conference to present some of the company’s innovative new products — around 400 novelties in the four different scales G, H0, TT and N in 2018 — to media representatives.

The range of new G-scale locomotives, the largest of the four scales offered by PIKO, shows three new molds, which were highly anticipated by model railroad fans.

For one thing there is the steam locomotive BR 95 DR. This bulky locomotive made a lot of friends during its service time in Thuringia and is still active for museum runs sometimes.
Besides, PIKO brings out the electric locomotive BR 103, a real classic of the German Federal Railways and probably one of the most famous German railway vehicles.

On top of that, PIKO launches the small diesel locomotive GE-25Ton, which is one of the most built locomotives in the world and an ideal shunting locomotive for G-scale systems. There is also a special version of this model which can be used as a track cleaning locomotive. This way the customer can make sure that his track is still functioning even after longer periods of inactivity.

All models are based on the well-known construction principles of PIKO G-scale products with a great focus on all the details of their originals. They are equipped with a strong motor, ball bearing mounted and chromed wheelsets, lighting that switches according to the driving direction and the well-known train driver. The range of G-scale products is extended by many new colour variations of passenger and freight cars.

The range of H0-scale products (scale of 1:87), the most important of PIKO’s product segments, will be extended by lots of interesting new products in the three different product lines Expert, Hobby and Classic nostalgie.

Some of these new products for the domestic and foreign market were highlighted in the course of today’s press conference.

After the success of the highly praised electric locomotive BR 152 PIKO releases another model of a German cult classic in 2018. Like the original, the detailed PIKO H0 model of the electronic locomotive BR E18 will surely find many admirers and friends.

The electronic locomotive BR 147 is another attractive new mold with typical PIKO characteristics, realistic appearance and model-specific details like a train destination display. The electronic locomotive BR 151, which was especially built for freight train service, impresses with its many technical features like the see-through engine room and the delicate lights.

The new range of diesel locomotives includes the biaxial industry locomotive TGK-2 Kaluga, which was widely used in the GDR, the striking V200 DR, the „Taiga Drums “ and the shunting locomotive BR V60 DB, which is still used today. All of course with delicate details and excellent driving characteristics.

The Polish fans of model railroads will be looking forward to the new molds of the diesel locomotive ST44, which is based on the Soviet locomotive M62, the passenger cars 111A and 112A and the tank car 406R. All of these were part of the everyday life in our eastern neighbouring state for decades and some of them are still in service.

For the Austrian market PIKO releases the electronic locomotive RH 1041 with a delicate roof design and in ÖBB decor. This model will be available from the end of January.

Swiss model railroad enthusiasts will probably look forward to a completely new family of vehicles in 2018: the heavy shuttle trains, the electronic railcar RBe 4/4 and the matching control car EW II. In 2019 the family will be completed with the already announced PIKO passenger and restaurant car EW I.

The modern diesel locomotive BB 60000, which was created for the shunting and freight service, will be a new mold for the French market and will be equipped with delicate metal handrails.

There will also be an addition in PIKO’s range of digital products in 2018.

After the release of the innovative PIKO SmartControl® digital system, which for the first time combined the benefits of the smartphone technology with the needs of model railroad fans, this year marks the launch of the “little brother” of this smart digital controller: The corded PIKO SmartControllight System will be released as a basic set and as part of many attractive starter sets. This system offers newcomers and returnees a particular affordable start in the world of digital model railroads. A combination of the two systems is easily possible via the PIKO LocoNet!

With the SmartDecoder 4.1 PIKO will release a completely new and self-developed generation of decoders in versions with and without sound. The decoders are designed to work with multiple interfaces and impress with an improved function mapping, a larger sound memory and a more powerful sound output. The partly mfx-capable decoders will start a new era of control and sound possibilities  for PIKO products.

With the long awaited flexible track and switches with concrete ties the popular PIKO A-track will also get important additions to its product range, which can be perfectly integrated into existing PIKO systems.

The PIKO H0 Classic nostalgie range, the range for collectors and fans of historic model railroads, and the affordable H0 Hobby range both will get new colour and lettering versions of popular wagons in the well-known PIKO quality.

The assortment of TT-scale products will be extended by the steam locomotive BR 55 DR, an absolute highlight in the 1:120 scale that will especially excite fans in eastern Germany. This is the first time this model will be released as a detailed serial product in this scale.

The range of PIKO N-scale products will be extended by two new molds, the electronic locomotive BR 116 DR of the DB and the diesel locomotive Rh 2400 of the Dutch State Railways (NS). Both will impress with their fine engravings, many lovingly recreated details and excellent running characteristics. Both vehicles will come with preinstalled strong sound and many digital features. Furthermore there will be a new railbus with the décor of the Chiemgau Bahn and new colour versions of the bulk good wagons Falns.

The complete range of the 2018 PIKO novelties in the scales H0, G, N and TT is visible online under www.piko.de or in the current catalogues for 2018, which are available at specialist shops or directly at PIKO since the beginning of the year.

Because of PIKO’s strong placement at retailers and the attractive novelties for the different markets and scales, PIKO plans a slight increase in sales of around 2%.

We anticipate that domestic sales will increase slightly more than export sales, where we expect a consolidation, due to the interesting and extensive range of new products. 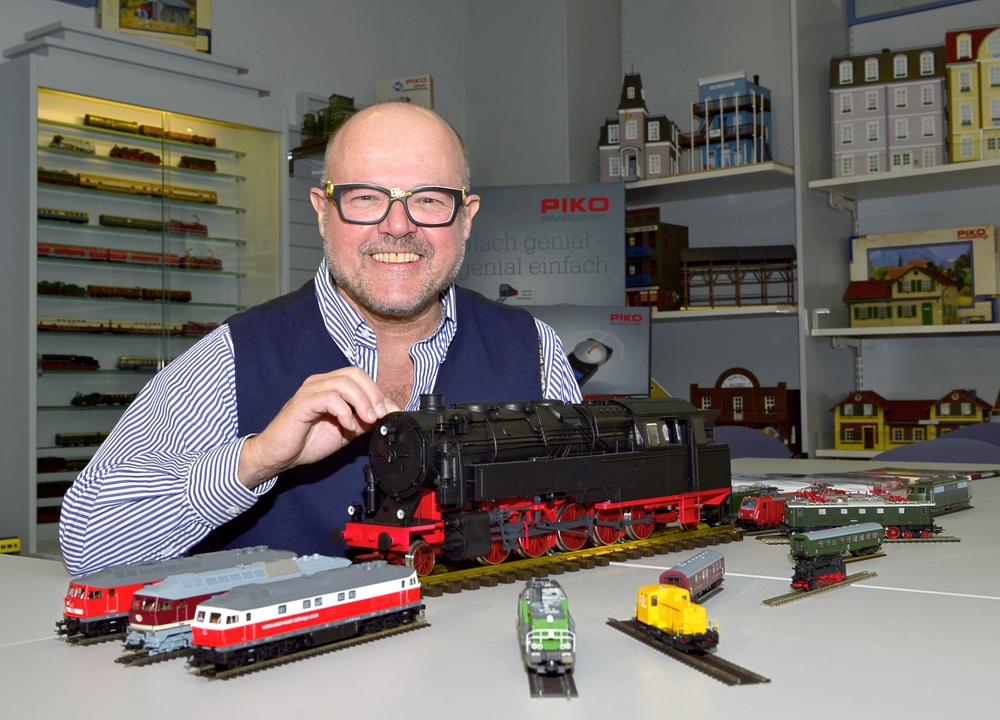 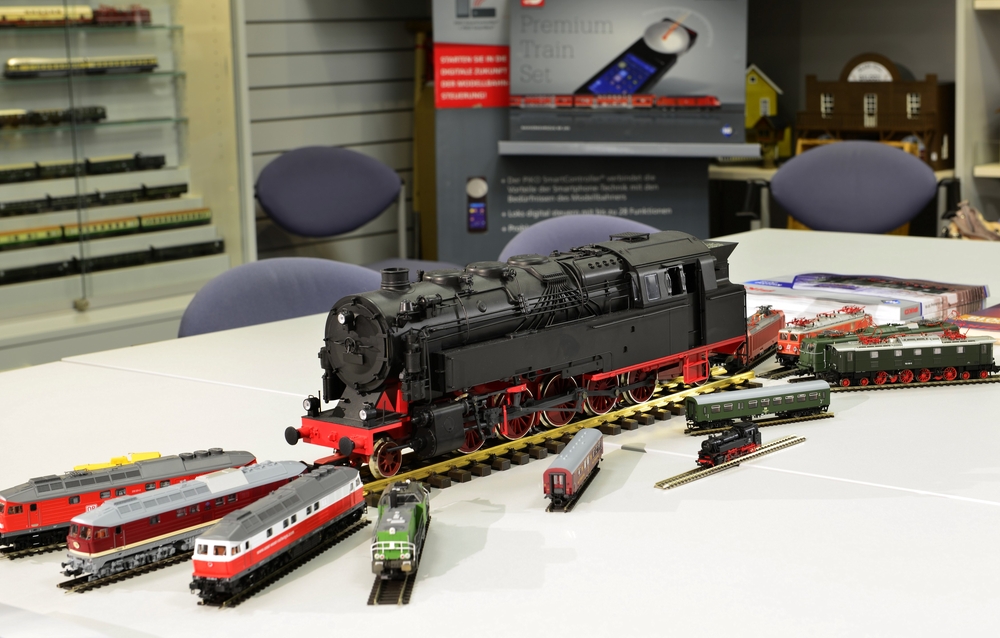 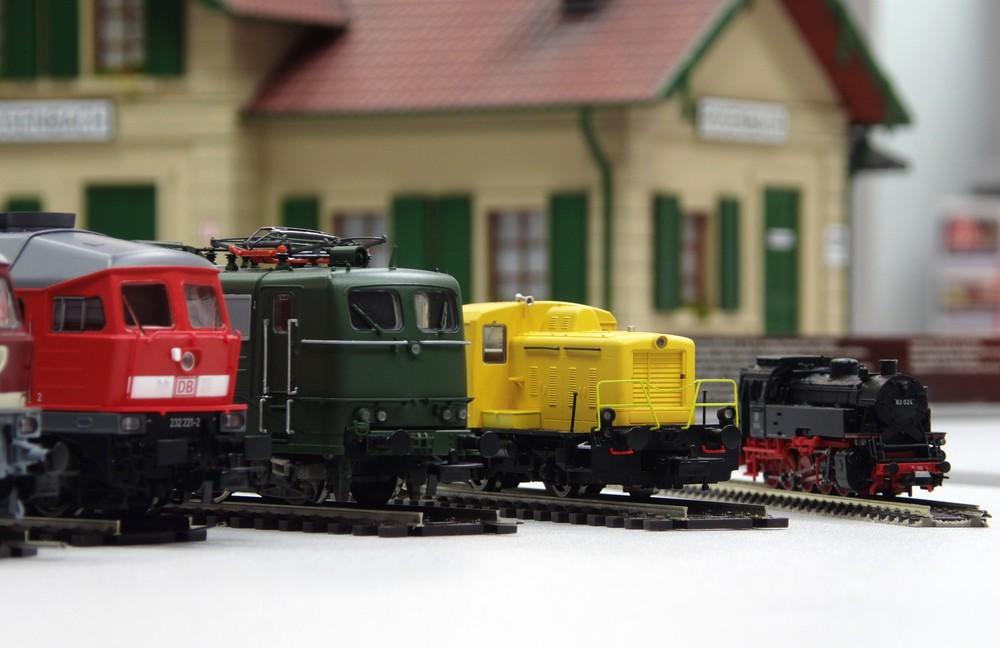 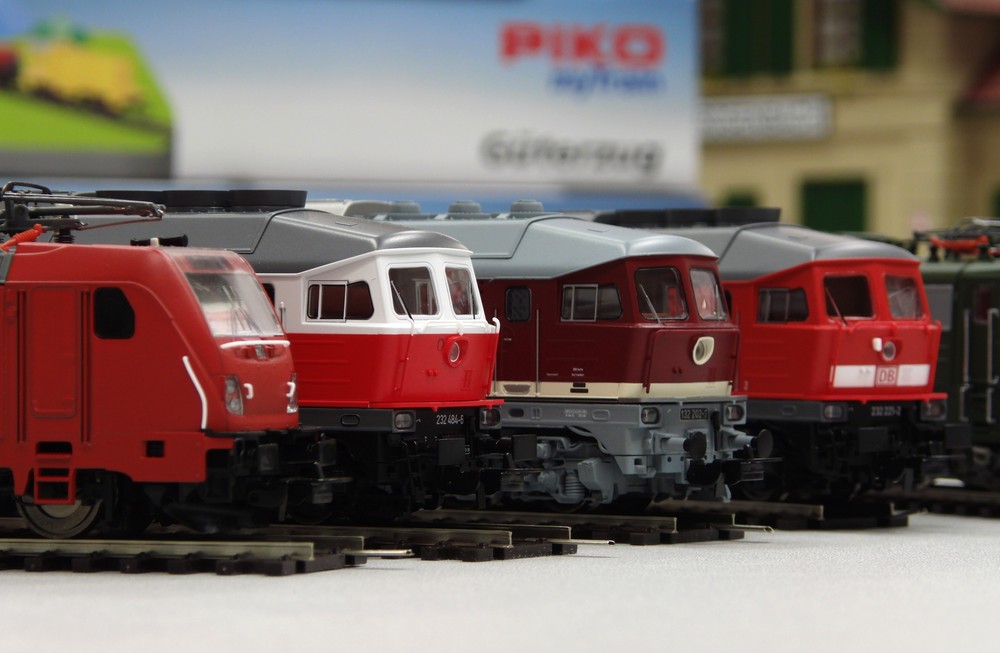 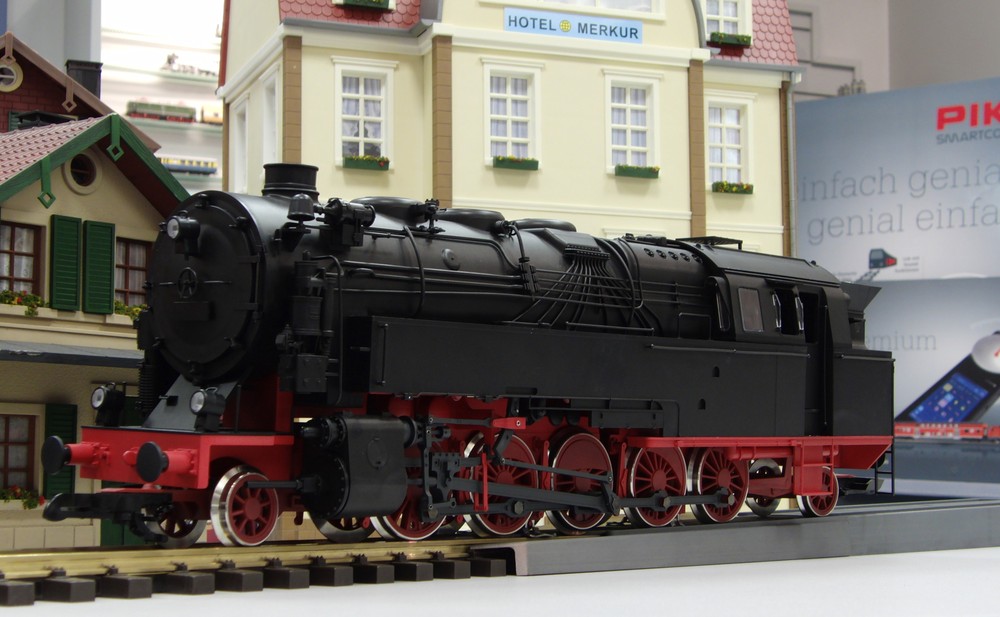 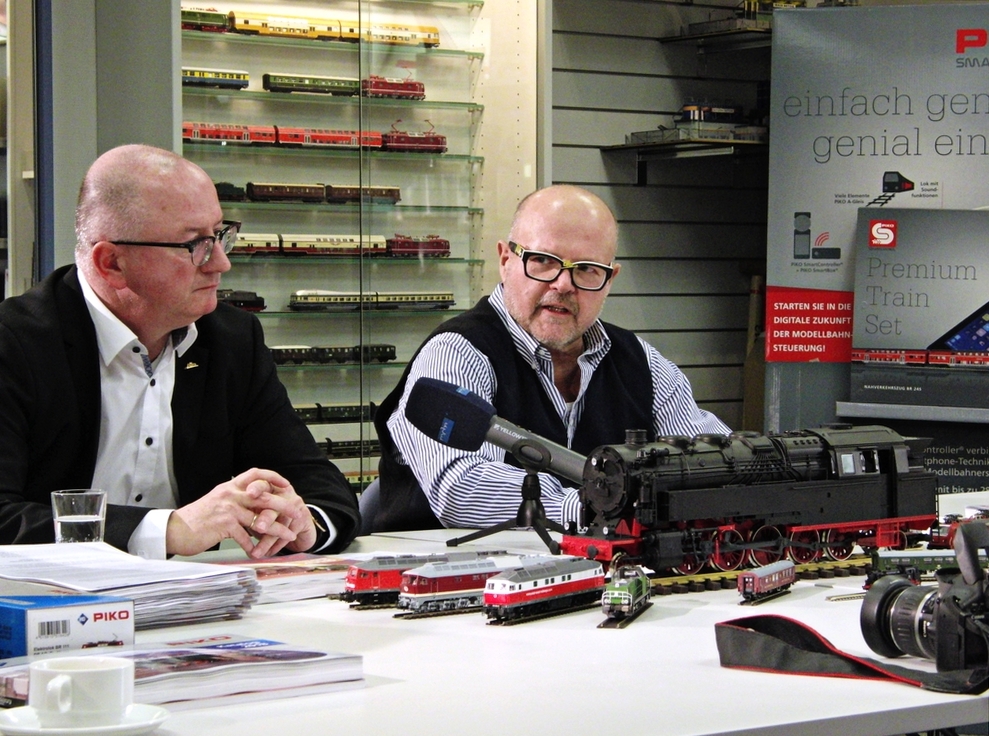